Where Did My America Go?

Where Did My America Go?

A book by Michael Solomon

Prepare for the next Revolution! 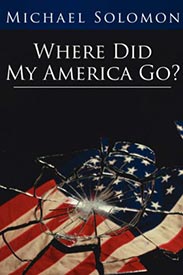 Michael Solomon is just an ordinary citizen, a traditionalist who has had enough of the rhetoric from politicians on both sides of the aisle. He may be starting a revolution with “Where Did My America Go?” A best selling book by Michael Solomon of Success Talk, Inc.

His message is critical for the survival of America as it once was.

He has witnessed the actions of the ACLU in their attempt, he believes, to carry out a plan to overthrow the American Government through political correctness.

He believes that groups that articulate hatred are dismantling the pedestal that America once stood on. They use the constitution as a soapbox for reform without ever considering the long-range consequences of their actions.

The author believes it is time to fight back. He has developed a plan to allow the silent majority to have their voice heard along with his.

What follows is an examination of what has transpired in America throughout the last millennium and crossing into the new century.

The author tackles sensitive issues in political America today, about which many people have expressed their anger, but have remained silent except in private circles.

Solomon examines with bold retrospect the issues of the war in Iraq, the media, education, Tort Reform, racial discrimination, the Ten Commandments, the oil crisis, the Middle East, immigration, global warming and a host of other issues that concern most Americans.

He examines how the press has and continually tries to influence the path of America through its biased reporting and skewed polls that are harmful to the American people and serve no one except their own agenda.

Throughout the book Solomon constantly asks, “Are you outraged yet?”

No topic is safe. He makes a strong, compassionate and persuasive plea to get involved. In the words of Voltaire, “Everyone is guilty of the good they do not do.”

“This book is an unbelievable testament to politics. My only regret is I didn’t write it.” – Steve Dunleavy, NY Post Columnist