A Novel by: Michael Solomon 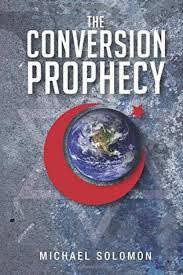 What if you awoke one morning to find all the flags flying in the free world were all Islamic?

I may be turning the political world upside down with this new and provocative novel.

What develops is a new form of terrorism without the shedding of one drop of blood or the firing of a single shot.

Peace in the name of one religion, Islam, will threaten to dominate mankind.

The story takes you from the halls of a Mosque in Indonesia to the highest
plateau of the political arena in Washington, where a real life plot has developed to take control of the entire economic balance of the global corporate world and completely change life on earth as we know it.

It will leave you wondering if a real Manchurian Candidate really does exist?

This book has won the prestigious national award by Books and Authors as the Best Book in Fiction for 2016. It was a finalist in the 2016 Next Generation Indie Book Awards, in the thriller category.  In 2017 Michael won the covenant John L. Weaver, Reader’s Choice Award.  His novel has already been written for the Hollywood screen.

From The U.S. Review of Books

In the Pantheon of literary genres, international thrillers have their own wing. There, encased in sepulchers with headstones writ large, stand names such as Robert Ludlum, John le Carré, Alistair MacLean and more. Their stories cross continents and languages to snare readers in compelling tales of intrigue. In the world’s they create, knowledge is power, and treachery always lurks within treaties between nations and often within promises between friends

Now, former New York City Police Officer, Michael Solomon, has turned his experienced ear for criminality, corruption, and conspiracies, to the world of high-flying deception in his debut novel, The Conversion Prophecy. Not the least bit intimidated by the renowned authors that have come before him, he confidently stakes his own claim to the genre with a globe-hopping tale of multinational mystery and suspense.

The author uses this shifting time technique to adroitly move multiple flesh and blood pawns across a vast transnational chessboard. But a lot more than a game is going on here, the results of which could be cataclysmic.

The players on Solomon’s continually changing battlefield include Secret Service Agents under the gun, career politicians with much to gain and more to lose, world leaders held hostage to a diabolical scheme, devout Moslems and devoted Jews, young men thrust into older men’s hatreds, plus an appropriate smattering of stone cold spies.

Revealing too much of the plot would deprive you of much of the fun inherent in peeling back one layer after another of Solomon’s fast-moving tale of assassination, infiltration, and the potential annihilation of the world as we know it. Suffice it to say that readers will be jetted to exotic locales, ensconced in expensive hotels, piped aboard luxurious yachts, and fêted with the finest food and wine. There will also be initiations into secret societies, closed-door meetings with the CIA and the Israeli Mossad, and financial maneuvering that brings the world to the brink of collapse.

If you’re the type who can pack your willing suspension of disbelief along with your appetite for adventure, then you’ll likely find The Conversion Prophecy a whirlwind excursion you won’t want to miss.